Running For My Life

First things first -- An email I wrote over ten years ago, when my first son, Max was barely 3 months old:

I often wondered what the hell Nike was talking about.  Just do what?  Just go spend $110 on those ugly-ass shoes with tiger stripes and the airbags?  I've never been mistaken for someone with much motivation when it came to physical fitness, but today I figured out what this timeless slogan really means.

Today, I fought off all the excuses I've been using for about 3 years.  I laced up the running shoes (yep, Nike) and used them for, drum roll please...running!  Now, I HATE RUNNING.  I have not voluntarily run for 15 years.  Wait, that wasn't voluntary either, my Dad forced me to join the cross-country team and mercifully let me quit 2 months into the season.
Since then it has been basketball (mostly 1/2 court) played at a medium pace.  The rest of my fitness routine has consisted of a strict regimen designed to slowly and methodically put on pounds with special emphasis on the midsection and the chin.  This increase in mass is also specially designed to avoid nasty side effects, like strength and agility.  Despite my stellar physique, I have finally concluded that I need to start running.  Why you ask?  Mostly because my silhouette is starting to resemble a pear perched on two toothpicks.  It is heading in that direction, and that is just too damn gross to deny anymore.

So today at lunchtime, two of my co-workers and I embarked on the journey to "Just Do It".  I fought it hard.  I fought it very hard.  But we took off and went for a whopping 25 minutes.  And we only stopped to walk twice.  Now before you laugh too hard, know that it was on a HILL!  The way out was downhill, the way back was all UPHILL.  I never realized this, but my lower back has a voice.  That voice was saying, "What the hell do you think you're doing?"  Damn it hurt.  My glutes (those are ass cheeks for you non-runners) were on fire.  I can only imagine what I'm going to feel like on Friday.  To celebrate our conquest, the guys and I treated ourselves to Carl's Jr. for lunch.  Gimme a break now, I just ran!  Baby steps now, baby steps.

So you're probably wondering why the heck I am writing this to you all.  Well, for one thing, I was sort of proud of myself.  But that is really just a tiny piece of it.  After all, I ran for 25 stupid minutes, BFD.  The real reason I write you today is so that I am held accountable.  By sharing with you that I have committed to this, it will make it much harder to let myself flake and take the easy way out.

Mark, I have no idea how you and all your buddies do it, but hopefully I'll figure it out sometime soon.  I think you Ironman-running, track-meet-having, 40-oz-chugging bastards are freaks, but I respect the fact that you guys get your asses out there. All I know is I really don't want to do it again. But I'm going to.

Nike was on to something there.

Yeah, I kept up with that for maybe a month before reverting back to my true self. Fast-forward ten years...to yesterday morning.


It is 6 a.m. Max is at my bedside shaking me awake, and try as I might I cannot find a snooze button anywhere on him. I'm often told how much Max and I are alike. But when it comes to mornings, we are polar opposites. The kid has always been an early riser. I on the other hand, love me some sleepy time. Among the favorite possessions in my house, my plasma and iPad are just a hair above the blackout shades in our room. I'm not proud of it, but I've always been a night owl who routinely stays up well past midnight. It is something I have struggled with, and for a significant chunk of my life I have wished that I could reel that in. Primarily so that I could not feel so tired during the day, but also because "morning people" just seem to have their shit together more than I do. Notice I said "wished" there instead of "tried", because even though I have known the solution to the problem (just go to bed, dumbass) I frequently ignore that solution in favor of doing things like watching old DVDs of "The White Shadow" with the director's commentary. But about a week ago I came up with a genius plan to solve three problems in one fell swoop.

Max just finished his Junior Lifeguard program a couple of weeks ago and was still pretty gung-ho about keeping up with the exercises he learned there. So I asked him if he would like to head down to Mission Bay 3 times a week in the mornings to do his exercises. I knew he would jump at the chance. With this plan I knew I'd be forced to go to bed and get up earlier. Max would hold me to it and I couldn't let him down. Second, I'd be getting in shape. I still play hoops, but despite that I am the heaviest I have ever been. Finally, I create an opportunity to spend some quality 1-on-1 time with my oldest boy. Soon enough he is going to be too "cool" for that.  Win-win-win. Plus I figured this just might turn me into one of those morning people who are all bright-eyed and bushy tailed. You know, kickstart my day and get me charged up with endorphins and all that good shit.

Wednesday was our first day at it. We got up at 6 and cruised down to Mission Bay. We picked out a spot and got to work. We started with something called "8-count Body Builders" which I am pretty sure were designed to kill me. Those were followed by standard push-ups and then some front and side planks. I was breaking a sweat, but still maintaining. After that it was time for the run. We decided we'd just start with one mile. One. One silly little mile. Holy shit. Seven minutes and 15 seconds later, I was gasping, heaving, and sweating like Patrick Ewing. By the time we got back home, I felt like I might puke. Um, where were my endorphins? Where was the feeling of accomplishment? How am I going to do this again on Friday? Max loved it.

After taking Thursday off, we were back at it at 6 on Friday morning. I was ready, making sure I had my phone in my pocket in case Max needed to call 911 quickly for some reason. The exercises were actually ok though except for those 8-count bastards. I was seriously dreading the mile though. But as we got into it, I realized that settling into a nice pace allows you to focus on the beauty of the bay, and lets your mind wander and really think about things. You know, things like, "Running is stupid…This sucks…What the hell am I doing?"  That sort of thing. At the end of that 2nd session, I felt something akin to a hangover. But while it took me until about lunchtime on Wednesday to start feeling human again, on Friday I did recover more quickly. And we both shaved 20 seconds off our mile time (Max - 6:54, Dad 6:55).

Unlike 10 years ago, I think I am going to stick with it this time. Even though a big part of me still wants to blow it off and sleep in, I've got my little alarm clock to hold me accountable now. Let's face it -- A little pain and fatigue is a small price to pay for what I am getting in return with my son. These are precious times. Father-Son moments where life lessons are taught about sticking with something, working hard, and not quitting even though you might want to. Who knows, I might even be able to teach him a few things too. 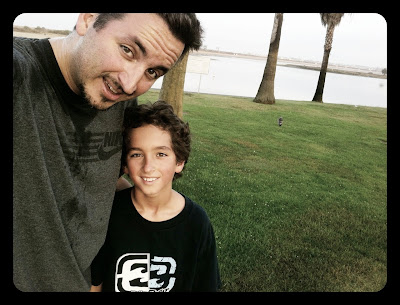