Inspiration comes in many shapes and sizes. Today I was absolutely amazed by a bee. As I got in my car this morning to head to work, I noticed the little guy on my windshield and thought, "How cute. Get ready to fly off, dude."

I backed out of the driveway, headed down my street and noticed he was still hanging tough. Impressive. I hit Balboa Ave. and picked up some speed. Mr. Bee is still chilling there like this is a pony ride in the park. Slightly agitated now, I accelerate. I'm thinking, "Alright, you've had your fun. Run along now little fella."

Highway time. I jump on 805 North just knowing this is the end of the line for my passenger. Wrong. I take it up to 70mph and cannot shake him. He's just staring at me through the windshield and then things get weird. I swear the little shit winked at me.

Just when I think I've lost this battle of wills, the clouds darken and it begins to drizzle. Checkmate, you little bastard. No way you are holding on at highway speed on wet glass. This is pretty much the point where the bee made me his bitch. He proceeds to methodically turn around step-by-step and face the oncoming wind and water. 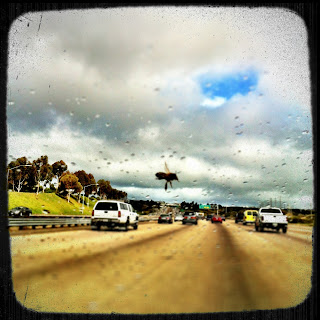 Not only does he now have his ass in my face, but I am fairly certain I heard him unleash a William Wallace-like cry of "FREEDOM!!" as we sped down the 805.

I'm really annoyed by this point. Does this bee think he's better than me? It's not enough to be blessed with the gift of flight, now he's gotta have a chauffer? Whatever, bee!

As we reach my exit a few minutes later, I am a beaten man. I start to gain a begrudging respect for this little winged wonder. Maybe the guy just wanted to cruise over to UTC to pick up a pollen slow cooker at Crate & Barrel or something.

I pull into my parking lot with the realization that I'd been looking at this all wrong. Rather than be annoyed, I should really be impressed by the tenacity of this little powerhouse who held on against impossible odds.

I got out of the car feeling inspired. When I left the house, I was dreading another boring day at work, but now I was ready to attack my day with similar gusto as that of my tiny companion. How ironic that just a few minutes before I had thought the wind was going to send that bee flying, but I ended up being the one who was blown away.

I got my things from the back of the car, locked it up and checked the windshield. Sure enough, my boy was still sitting there like a little champion.

It was kind of heartbreaking to squish him with that magazine.
Posted by jjasner at 11:49 PM No comments: