Thinking Outside the [Batter's] Box

We're wrapping up our sixth year of youth baseball with Max and Luke. There have been a lot of highs and lows in those six years, but one thing has remained constant: When the kids are on the field, the grown men around that diamond tend to lose their minds. A few games ago, I found myself chuckling at the lunacy of all the coaches, dads, grandpas, uncles and fans each shouting their own flavor of "encouragement" at each little guy in the batter's box. 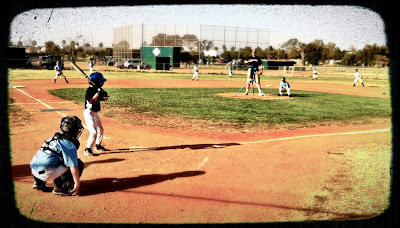 If you've ever golfed, you know the madness of trying to maintain the perfect swing to hit that stupid little ball.

Yeah, you still sliced it.

And that describes a ball struck in relative silence that isn't even moving! Now imagine trying to hit a ball flying at you while at least eight men scream various tips at you. And you're seven.
Why do we expect a kid to be able to pick up the sign from 3rd base when he can't even pick up his socks off the floor? Why do we think he is going to be able to "keep his hands back, get his hips through the zone and finish high" every time when he just wiped his nose on his jersey? I believe deep down within our manly brains we do realize the absurdity of it all. Yet our mouths invariably ignore the brain and continue to pepper the players with advice. Usually while someone on the other side of the field yells the opposite. I'd like to pretend I've always been above this, but I have been very much a participant over the years. The best part is watching the deer-in-headlights batter nod in "understanding" before promptly doing the exact same thing on the very next pitch. It is truly priceless (at least in hindsight it is)!
Below is a "short" list of easy-to-follow tips regularly heard yelled at young players (simultaneously) from their coaches, dads and fans. Starting with tips at the feet moving all the way up to the head. On the right is a list of what I imagine is going on in the kid's mind as these instructions are flying at him: 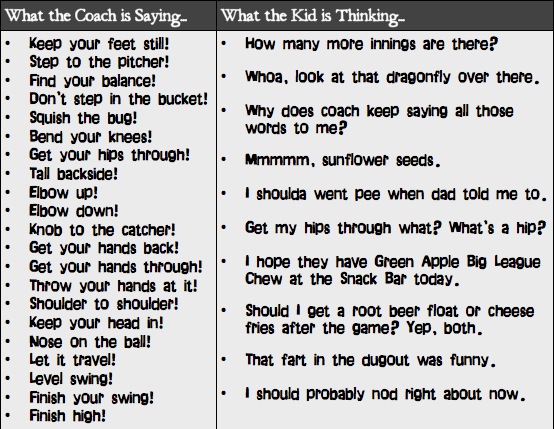 And just think, in a couple more years that column on the right is going to include girls too.
Posted by jjasner at 7:34 PM